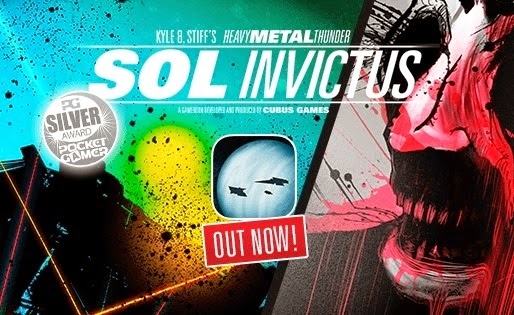 Hello all. Today, we have Kyle B. Stiff who has written several wonderful books including two gamebooks in the Heavy Metal Thunder universe.

Book 2 continued with the world building with Cromulus being part of a team, raiding a base on Pluto and meeting a member of the special forces. Have you planned out most of the Heavy Metal Thunder universe already?

Yes, I have! I never understood the idea of planning out the beginning of the story, then working through the middle in a sequential order, and then hoping for a good ending as the ending drew near. For me, it all comes at the same time. I wouldn't start a story without an ending in mind any more than I'd start writing without a main character. Every book is already roughly planned out, so I already have an idea of the general arc concerning humanity's war against the Invaders. It never gets boring to write, though, because there are plenty of spaces in the middle where the story can shift and change and surprise me.

I thought that book 2 was a little darker than book 1. Is this something you intended to happen?

Yes! Well, sort of. Growing older has taught me to use humor a little more sparingly. I was a lot younger when I wrote the first one, and I think that shows in the writing.

Also I wanted to really dive into the subject of mind control in book two, and that's not the kind of subject that allows any kind of humor but the black variety. I always wanted mind control to be an important part of Heavy Metal Thunder. Writing about “the future” is kind of ridiculous, because that's not what you're really doing. Sci-fi writers take things happening today and make them more extreme so that they're easier to see. I think mind control is one of those things that our descendants will look back on and say, “Why didn't they do anything about it?” (Either that, or they won't say or think about it at all because they will be incapable of doing so.)

We don't really talk about mind control in our every day life, but I think it's the most important thing that's happening in our era. I really do. It hides behind the scenes because it's just too scary to look at directly. But throughout the Heavy Metal Thunder series I want to bring the reader closer and closer to the subject.

But I have to poke fun at the whole thing too, because when you wake up one day and realize you are and have always been an automaton sleep-walking through life, what else can you do but laugh? Of course, a really heroic person would follow up that laugh with a spin kick and a grenade and a one-liner that destroys all oppressors (no joke), and that's kind of what the whole series is about.

Cubus Games have turned your books into apps. Is there anything you had to change about your books to make them more app-friendly?

Oh, yes. I'm sure the general idea is that you can take the original document, put some spit'n'polish on the links, mash it into a paste and run it through an app grinder, and PA-POW, you've got yourself a bug-free money printer. Not true! It takes a group of people mopping sweat off their brow and losing sleep to make something like this a reality. It's tough work, but rewarding! Now that I think about it, maybe that's the difference between the armchair expert at the bar who knows what's wrong with everything, and the person who knows what it really takes to influence a very narrow aspect of reality. It's all sweat and lack of sleep.

As for concrete details, we had to change the inventory management system, combat and stat checks were given a dice-rolling mechanic, and of course plenty of music and artwork was added, thus turning a flat, dimensionless text game into something like a senses-shattering hypercube from a twisting and turning interdimensional nexus beyond all human comprehension. It's easy to admit that I enjoy the gamebook apps much, much more than my original gamebooks!

Is there any advice that you would offer to a budding gamebook writer?

You guys should go crazy with your ideas. Any limitations or restrictions that you think apply to the medium simply no longer matter. And maybe they never did. Attracting new readers to the medium means getting away from reliable conventions. If you're afraid your gamebook idea won't sell because it's too “out there”, then… get over it! What are you going to do, worry about dollars your whole life? Grow a spine! If you're the kind of writer with the stones to write a gamebook, then you're already an unconventional thinker. You have ideas like no one else. The world is ready for your crazy, unique story. The world might not pay for it, but it's certainly ready for it!

The most successful gamebooks during the golden age of gamebooks were unconventional. Lone Wolf may seem like a standard medieval Tolkien-lite sword and sorcery tale, but it's not. Instead of a standard knight or wizard, Lone Wolf was a forest monk with psychic powers who worshipped the sun. The “dark lords” he was fighting looked like something from an H.R. Giger painting. How psychedelic is that?! Lone Wolf makes Game of Thrones look like the most timid cookie-cutter story ever! And then there's the classic gamebook series Way of the Tiger. Standard ninja fare, right? Spoiler: Not really. The protagonist ended up running his own city, and instead of a happy ending, the final book ended with our hero stuck in a trap while monsters armed with baseball bats threatened to practice their home-run swings on his legs and head. Or something like that. But that's why those stories are the strongest soldiers in the gamebook army. They are simply balls-out crazy. And that's why the next generation of gamebook writers must take the creativity up a notch, or up many notches, or perhaps beyond all notches.

The series seems to be building up to something. Will Earth eventually be liberated?

Yes, it will! Sorry for the spoiler. Then again, it's not really a spoiler, and I'll tell you why. I'm not a big believer in the idea that anyone can achieve a one hundred percent “happy ending” in real life, and certainly never in a predictable manner, so I never write stories that end with total happiness and predictability. It feels dishonest. It is possible for people or groups to get what they want, but what they wanted is rarely what they expected it to be. That's life!

So I have a few endings planned for the series (not counting random player death), some sad, some nightmarish, some bittersweet, some brutal, some weird, all memorable (I hope), and none in they key of, “We beat the evil aliens, let's celebrate and carry Cromulus around on our shoulders!” In Heavy Metal Thunder, the enemy is so powerful and so clever that humanity is going to have to go to insane lengths if they want to have any chance of winning this war. And even if humanity does go the distance, what will they become? Would a person who had every ounce of psychological weakness stripped away and fought against all odds in the lifeless vacuum of outer space even be capable of clocking in and working for some company during peacetime?

The modern world requires constant submission; otherwise it doesn't work. Is freedom possible under those circumstances? What will happen to our tireless, unappreciated human fanatics? Those are the kinds of questions I want to explore in Heavy Metal Thunder!

When will Heavy Metal Thunder 3 be out?

Forgive me for not nailing it down to something more specific, but please remember that I'm not a writer already established in a kingdom of his own making. I'm still a wandering ronin hungry to heap fame upon my name and win a title for myself. That means I have to continually look for other projects, which of course takes a lot of time, and most projects fall apart once enough people realize that the path is difficult and the only reward that's guaranteed is another day of hard work.

But don't worry, readers – I will never give up! Together we can bring this war to its end and help Commander Cromulus achive his ultimate destiny! I hope you enjoy Heavy Metal Thunder and Sol Invictus. Please keep your eyes peeled for the third chapter in the Heavy Metal Thunder saga... Slaughter at Masada!
http://www.cubusgames.com/
http://www.amazon.com/Kyle-B.-Stiff/e/B005I56W3Q/
https://kylebstiff.wordpress.com/