Iron Heroes  is a D20 RPG created by Monte Cooke.  It has some similarities to Dungeons and Dragons,

but its setting is distinctly low magic.  However, it is not simply Dungeons and Dragons with the magic removed; rather, new classes and rules have been created in order to make play more awesome than ever.  Out of the 10 classes available, only two are not combat specialists and only one of the two is a magic user and that one is totally optional.  These combat specialists have abilities that make them far better than any Dungeons and Dragons barbarian.  The archer can pull of great feats of ranged attack.  The armiger can do powerful things with defensive abilities and the Man-At-Arms is so versatile, he can actually change feats if he wants.

This RPG was a good inspiration for me in many ways.  First of all, it showed me that removing magic from a system did not necessarily mean making it less interesting.  It showed me good ways to make non magical characters a lot more interesting.  One of the ways that these characters are more interesting is that they are capable of stunts in combat.  A stunt is an action, not covered by the combat rules, that your character can attempt to make.  Examples from the book include throwing sand in your opponent's face, run along a narrow wall to maneuver around a foe or cracking open a keg of beer to send a stream of liquid into an opponent's face.  I can imagine that players having a great time thinking up creative stunts and then being able to boast about their victories over their foes.

This idea helped me greatly when I was writing my Tunnels and Trolls solos.  In Tunnels and Trolls, you could be a character that is not very good at combat, such as a rogue or a wizard, or even a citizen.  I did not want to exclude them from my solos with too many combats, but at the same time, I did not want to de-power the enemies so that the warriors could easily defeat them.  Which is why I created the option of doing stunts in a combat round.  Basically, each combat had the option of four skill tests, that may not have been based on combat based abilities.  In fact, I made sure that every ability had a chance to use a stunt.  My rules cover this idea in more detail.  This meant that even a wizard could use their skills to overcome a stronger foe. 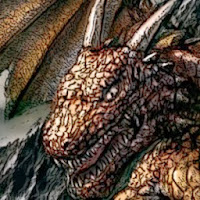 The other great idea from Iron Heroes was the idea of grouping skills.  The RPG uses the same skills as .  However, Iron Heroes also has skill groups.  A skill group is a collection of related skills.  For example, the agility skill group covers balance, escape artist, and tumble, whilst the mysticism skill group covers concentration, decipher script, spellcraft and use magic device.  You can spend a skill point on a skill group rather than one skill and get bonuses in all the skills in that group. This mechanic helped me when working with Shane Garvey on the Adventurer system.  Gamebook systems have to be a lot simpler than most RPG systems so that the writer has less to think about when thinking about how a hero can get out of a situation and the reader can create a character in minutes.  We wanted the skills to be similar to RPGs, but not be so numerous, so I, inspired by the Iron Heroes RPG, I suggested that we have skills cover a multitude of things.
SRD Dungeons and Dragons, which means that it has about 40 skills.  Iron Heroes has those same skills, but it breaks them into groups.  If you choose to invest skill points in the group, you get bonuses for all the skills in the group, which made me realise that I could do something similar.

So there we are.  I have read many RPGs and played several games that have helped me with gamebook systems and I will be talking about others in future posts.