April A to Z - A is for Ambush! An interview with PJ Montgomery, illustrator for the Troltooth Wars graphic novel 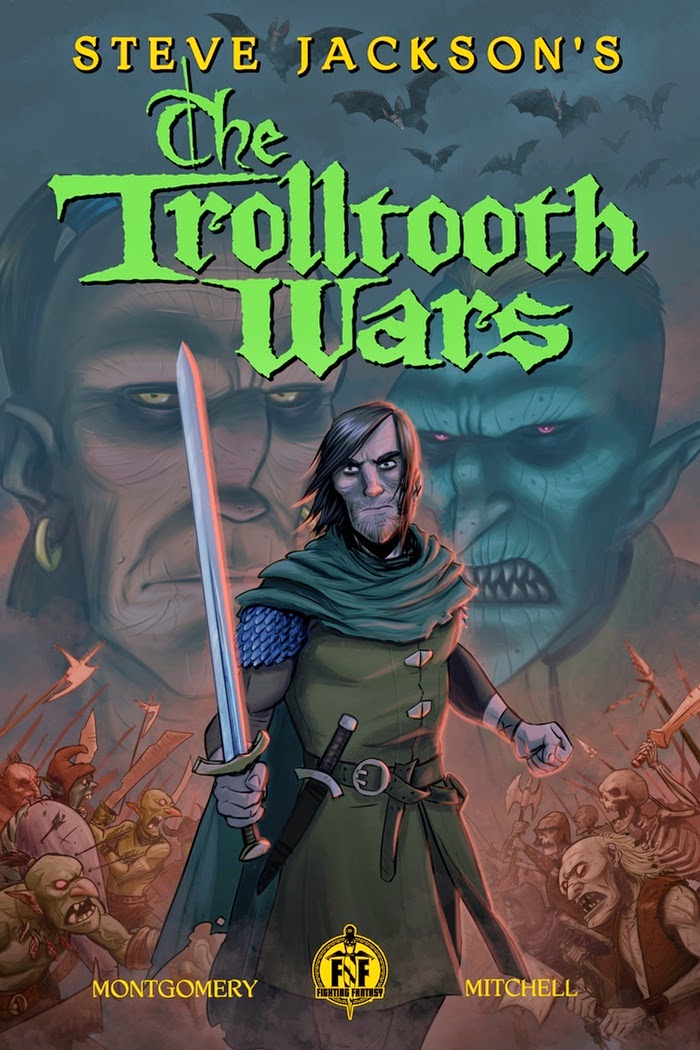 Good day to you all! We start the April A to Z on a high note as the kickstarter for the Trolltooth Wars graphic novel is now fully funded! Which means that for £15, you can get a copy of the book (there are other fun things at other backer levels). Also, if they manage to get £1000 over their target, everyone who orders the book also gets a fun surprise! When this post goes live, there will be about 30 hours left to do this, so head over there now! The interview will still be waiting here, so don't worry about that.

Anyway. On with the interview!

I'm a writer, originally from Surrey, but currently based in Cardiff. I've got a number of credits to my name, including co-writer on the horror comedy comic Stiffs, a short story in the superhero anthology The Pride Adventures, plus a number of episodes of the online radio sitcom, Supermarket Matters.

What is your favourite Fighting Fantasy book?

Oh, that's a big question. There are plenty that I love a lot. Warlock of Firetop Mountain will always have a special place in my heart, since it was not only the first in the series, but the first one I had. Being a massive fan of superhero comics, I also love Appointment With FEAR (despite how difficult Steve made it!), and the atmosphere of City of Thieves makes that a firm favourite. However, if I absolutely had to pick, it would probably be a tie between Moonrunner (a medieval murder mystery with plenty of dark horror elements really appeals to me) and Howl of the Werewolf (just the idea behind that book is absolutely brilliant).

How did you get involved in the Trolltooth Wars?

The original idea to turn Trolltooth Wars into a graphic novel was mine. It was something I'd been mulling over for a while, but hadn't really made any strides towards making a reality. One morning, just on the off chance, I decided to e-mail Jamie Fry (the Warlock of the FF website, who handles rights enquiries for Steve and Ian). Later that day, I had an e-mail sitting in my inbox from Steve Jackson, and it all moved on from there. And can I just say, for someone who grew up reading Fighting Fantasy books, and being a lifelong fan, just having an e-mail from Steve was pretty exciting!

Apart from the novel itself, what other source material have you used to help you with your graphic novel?

I've gone back to the original FF books to feature the key characters and locations in the novel, so Citadel of Chaos, Creature of Havoc, Warlock of Firetop Mountain and Forest of Doom have all been thumbed through a fair bit. There are also a couple of small moments which refer to both City of Thieves and Caverns of the Snow Witch, plus my copies of Titan and the Tenth Anniversary Year Book have both been well thumbed for this project.

How was running a kickstarter?

It's been an interesting experience. It's a lot of work, more than I was expecting if I'm honest. I have friends who have run Kickstarters before, both successful and unsuccessful, and they all told me that it was a lot of work, but I don't think it quite hits you just what that means until you actually do it. And there are the days when you're not getting many pledges come through, when it can really get you down, even though, rationally, you know from the off that some days will be slower than others. But overall, I've found it to be a fun and rewarding experience. It's put me in contact with a lot of Fighting Fantasy fans all over the world, all of whom have been very supportive of the project and a pleasure to talk to.

Do you have any advice to people who want to run a kickstarter?

Make sure you're ready before you launch. We had to delay the launch of ours when we had the opportunity to add in some extra rewards, but I'm glad we did, because it gave us more time to work on it and make sure it was ready. Honestly, you can't do too much preparation for this. And make sure that you're ready to be working solidly while the Kickstarter runs. Finally, try not to let the slow days get to you. They'll happen, but you just have to move on and wait for the better days. I could do with listening to that last one myself a bit more!

Any plans for the other Fighting Fantasy novels to be turned into graphic novels?

Not at the moment, no. Don't get me wrong, I would love to carry on and adapt both Demonsteadler and Shadowmaster, then move on to adapt all four Zagor Chronicles, but we really have to see how Trolltooth Wars does first. If it does well, then maybe. The more people who buy Trolltooth Wars, the more the chance of further Fighting Fantasy comics increases. So if fans are interested, and they haven't done so yet, they should really back Steve Jackson's The Trolltooth Wars on Kickstarter!

Do you have any other projects that you would like to plug?

I can't really leave you without mentioning Stiffs in a little more detail. It's a horror comedy set in the South Wales Valleys, about a group of twenty-something call centre workers who hunt zombies in their spare time. One of them just happens to be a talking monkey. It's co-written by myself, Drew Davies and Joe Glass, with art by Trolltooth Wars artist, Gavin Mitchell. The first three issues (of five) are available now, either through ComiXology, or our own webstore.

I'm also the scriptwriter on an upcoming comic, Dynamite. This one is the story of Harry Harwich, a man who, disillusioned with his life and the world around him, becomes the anti-establishment vigilante, Dynamite. It's based on an album of the same name by musician Kevin Pearce, who I co-plotted the book with, an illustrated by Shaun Speight. It's due out later this year, but fans can be kept updated on the Facebook page!