Good day to you, lovely people! Today, we have the wonderful and talented Paul Gresty,
writer of the excellent gamebooks Arcana Agency , The Orpheus Ruse and MetaHuman Inc..
He has several great projects on the way, so I'll let him talk about them... 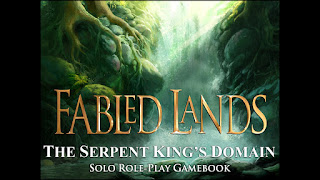 How is Fabled Lands: The SerpentKing's Domain going? Can you give us any previews on what to expect? Any items that might be useful?

'Sup, Stu.
Expect snakes. And a few spiders. And a whole bunch of trees. The book has suffered a couple of holdups, but for my part I'm chunking along with it quite nicely, now.
Regarding previews… I do have some criticisms of the first six Fabled Lands books, and I wanted to address those. Most notably, the books don't scale well once your character is up at the higher levels. The books are so open-ended that there are, of course, a bunch of exploits. It isn't so hard to get up to the high ranks, or to max out your stats, or to make a ton of money. Your character is probably carrying that amazing, undroppable White Sword, too.
So I hope to throw in a few curveballs that will cause even the higher-rank folks to stop and pause. Opponents that don't attack in a conventional way, or that use your own strengths against you. You see a little of that in the Dunpala demo adventure – I think that Kerep Tlotor can give you a bloody nose even if you're used to breezing through combats without taking a scratch.
Regarding items, that's one possible way of establishing a little variation between characters from playthrough to playthrough. As it is, there isn't much difference between, say, a high-level Troubadour and a high-level Mage and a high-level Warrior. You'll see a few magic items that work differently for different professions. You'll see a little item-building, where you'll be able to get one cool item or the other – but not both. Your character might still be amazingly powerful by the time you're done with FL: SKD – but your high-level character will look quite different to your buddy's high-level character.
It's curious that you mention items. They're my big headache just now. Interesting quest rewards, that you don't want to dump at the nearest market. Interesting market lists. Who would have thought that could be so complicated?

What is your favourite bit about working on Fabled Lands? Are you including a few things that might be in future books?

Dave Morris and Jamie Thomson are gamebook grand masters. They've created an amazing fantasy world, and a game system that is both simple and yet that allows immense diversity for the player and for the encounters. They've written six books that establish a very sparse style of writing. And now I get to play around inside all that. They've already done most of the heavy lifting, which grants me the freedom to be like a big kid in a toyshop. That's my favourite aspect about working on the book.
And it's also the most intimidating aspect. Though I've come to know the series relatively late, I'm very conscious of what it means to the people who've been waiting 20 years for this. It's a lot of pressure to produce a book that approaches the same level of quality that Dave and Jamie have already established.
Sometimes I worry that Fabled Lands fans will hate me for ruining their series. 'This is worse than Jar-Jar!' they shout, their cries cutting through my nightmares. 'This is worse than Jar-Jar!'
In terms of future books… We can never be too certain about the future of the series, so I don't want to go crazy with hooks to as-yet-unwritten books. But yeah, I'm keeping books 8 to 12 firmly in mind.
I've been able to rummage through Dave and Jamie's original notes for the rest of the series, and they've even shot a few ideas my way quite recently for The Serpent King's Domain. All of that stuff goes in. Fabled Lands is still their baby. 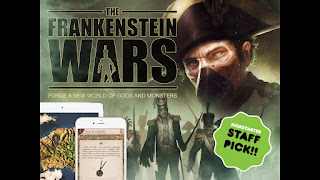 What is The Frankenstein Wars about? What kind of gamebook are we to expect?

The Frankenstein Wars is an app from Cubus Games that focuses on two brothers caught on opposing sides of a technological revolution in France in the 1800s – that is, the emergence of Frankenstein's method of creating life, and reanimating the dead. At various points in the story the player personifies two brothers, Thomas and Anton Clerval, who are initially caught on opposing sides of the conflict.
I'm not sure 'gamebook' is the appropriate term, in fact. In some ways The Frankenstein Wars is poles apart from Fabled Lands – in this, you personify pre-existing characters, and the focus is on how they grow as they experience the events around them. Do their moral values evolve, or do they cling to their initial perspectives? Do they change allegiance? All of that is in the hands of the player – and so it's interactive fiction, absolutely, but I'm not sure 'gamebook' is apt. It's a world apart from Fighting Fantasy, or Choose Your Own Adventure.
And yet in some ways it's very like Fabled Lands. We're going for short, stripped-down text. The Cubus guys are harsh in imposing limits on the length of each section of text, and I think that's a big plus point. The choices come thick and fast.
It's a hard one to write – perversely, because it takes place in a historical, real-world setting. There's been a big learning curve as I get up to speed on 19th-century French history. I can't just write, 'A mahogany door occupies one wall' – if I do, I have to go look up mahogany on Wikipedia, find out if it was widely used in France in the 1827, and so forth. The horror and science-fiction elements are easy in comparison – I can just make those up.
Maybe I'm being precious. Writing The Frankenstein Wars, my big job is just to put the player in engaging, dramatic situations, and then sling mud at them. Then my job is done; it's up to the player to decide how to react.

Do you have any other projects in the pipeline?

Maybe. I'm increasingly working as a freelancer, which means I keep one beady eye on the sector. Then, when I spot an opportunity, I'm ready to pounce, like a hungry lion striving to tear apart the flesh of a young gazelle.
Yeah, that's what I'm like.
Lately I'm writing a lot of game code rather than plain text, so I'm currently finding ways to get faster and better at that. I have no background at all in programming; I'd imagined that would be a chore. Turns out it's actually quite fun.

What advice would you want to give to someone who wants to write a gamebook?

Story is paramount. Story, story, story. Without a compelling story, you have nothing. Worry about the precise format and game mechanics only once you have that.
What I really liked in your own Asuria Awakens, Stuart, is the creepy 'Invaders of the Body Snatchers' vibe. That was the big draw there, for me.
Plan before you get started, although that comes under the 'story' recommendation above. You might be able to get away with pantsing a gamebook – but odds are it'll be much more coherent if you're working to a plan.
Don't go too retro, neither in content nor format. The most interesting gamebooky stories I read are things that I could never have thought of by myself.
Choice of Games are great for that. They have a huge mix of genres and writing styles. They now provide the first 25% or so of each game for free – you can really sift through everything on their site, or on your particular app provider, to see which games grab your interest.
Write fast, particularly if you have a lot going on. It just makes it easier to keep everything in your puny human brain.
Don't be overambitious. I'm guilty of this one again and again. With gamebooks, with interactive fiction in general, it's all too easy to get yourself tied up in knots. You start out with grand ambitions of innovative gameplay and story branches; you end up creating 100,000 words of needless work for yourself.