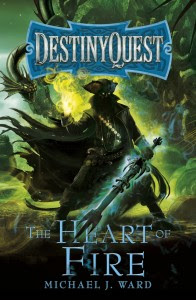 Michael J. Ward is the brilliant writer behind the excellent Destiny Quest series.  I interviewed him last year and he is back again to tell us what he's been up to since April.  I also had the privilege of meeting Michael at Dragonmeet last November  And he has been a busy boy.  Let's find out more...

Who are you and how you got into gamebooks?

My name is Mike Ward (sorry, Michael J. Ward if we’re being all ‘authory’ and officious!). I’m responsible for the DestinyQuest series of gamebooks – the first of which I originally self-published, but was subsequently taken on by Gollancz/Orion Books.
I think most people probably know how I first got into gamebooks. I grew up in the seventies/eighties, so I’m old enough to remember the first release of Warlock of Firetop Mountain (and the slightly less cool, CYOA books). As computer games were still in their ‘Neanderthal’ phase, nothing could really come close to the interactivity and fun of a gamebook or RPG, like Dungeons & Dragons. I was hooked (although managed to avoid sporting a dodgy beard).

I’ve completed the second book in the DestinyQuest series, The Heart of Fire – which was published in November of last year. I had listened and taken note of feedback regarding the first book (and of course, no one is a harsher critic than myself), so with The Heart of Fire I really sought to give the reader a lot more choices and control over the story. As well as introducing factions, which the player can choose to side with, I also tweaked the combat mechanics (hopefully making it quicker and more dynamic to play), and added the team  battles (where you can team up your heroes from different books to take on epic foes). I was really pleased with The Heart of Fire – it felt more like the book I always wanted to write to kick start the series in style.

Since July/August of last year, I have been writing the third book in the series, The Eye of Winter’s Fury. In fact, as I type this for your blog, I’m a couple of weeks away from completing it. This has been a tough book to write, mainly because of the subject matter, but also because (again) I really wanted to push the level of the story-telling and the choices that the reader is given in the narrative. The book takes place in the frozen north of Valeron, where we take on a specific character and follow their adventures. The story takes place after the events of The Heart of Fire, so there will be references to that book, but it can also be played completely separately if readers choose to do so.

In The Eye of Winter’s Fury, I think the story is a lot darker and a bit more adult. Some readers may even be a little shocked by just how brutal and unrelenting some of the elements can be. I haven’t held back anything on this one; I want the reader to be completely immersed in the brutal and dangerous environment of the north, to feel for their character and to also be left with a sense that they have experienced a real journey by its end.

For the game/strategists out there, The Eye of Winter’s Fury will also pack a punch in the game stakes too. A new special ability has been introduced, which will actually have quite an impact on combats and strategies. I’ve had a lot of fun with the careers this time around, too – and really tried to make them feel more dynamic and play very differently. There are also some ‘dice/game challenges’ that don’t involve combat. I don’t want to give too much a way at this point, but I think players will have a lot of fun with the sub-game that has been introduced. It also means there will be a new hero sheet!

Finally, to please the hardcore who feel that Legion and Heart were just not punishing enough, there is a death penalty system in DQ3. Players will now have to record each combat defeat, which can then lead onto penalties and afflictions for their character. Of course, there will be chances to ‘remove’ these also, if you can find the correct items. 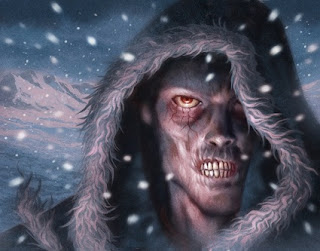 What do you plan on doing now?

Well, the next month or so, I’ll be finishing up The Eye of Winter’s Fury, proofing and checking the copy and also testing the combat. I hope to have all that done and with my publishers by mid-May. Then, after probably a week of getting very, very drunk (!) I’ll actually be back to my ‘day job’, freelancing and writing education materials for schools – got to earn the pennies, I’m afraid. At this point, I’m not commissioned to write any more gamebooks; it will be up to my publishers and the sales of the first three books, as to whether I’ll get the green light to work on DQ4.

The end of the year will also see the release of The Legion of Shadow in French and Spanish versions. I’m really looking forward to seeing these – will be odd to see my text in another language! It also means that French and Spanish gamers can finally get hold of the books and, hopefully, swell the ranks of the DQ fans around the world. So all good.

I think the next few years may see quite a split in the genre – with gamebooks probably becoming more interactive and gamery (thanks to the blossoming app market), whilst more story/narrative focused ‘gamebooks’ may go the other way, removing the game and combat mechanics altogether (or at least making them transparent), and just solely focusing on narrative choices. I think there is a big market of readers who may enjoy the fun and control of reading a story where they are the ‘hero’ and can influence the narrative, but are put off by the more fantasy/game-orientated aspects.
I also think, with mobile technology, there is huge potential for gamebooks to cease being solo experiences – and instead, open up opportunities for readers to collaborate, be able to share and influence each others’ narratives, give gamebooks almost an MMO feel.
I think it is quite an exciting time for gamebooks, particularly with the technology that we now have available . But I’m afraid, at heart, I’m still a print lover – so, I hope gamebook readers will keep supporting old fogies like me! (I still haven’t grown the beard though…)

You can get the Legion of Shadow here.

You can get the Heart of Fire here.

Both books are available in physical and Kindle forms.