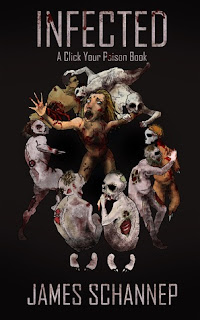 Yes, I'm sure about 78% of all A to Z blog posts today are about Zombies, but then why not?  They are very cool.

And today, we have a gamebook author who has written a zombie apocalypse gamebook.  his name is James Schannep and his first Click Your Poison Book, Infected is available now as an ebook  or as a physical book from Createspace or Amazon.  He has also written an essay on why zombies are cool (at the bottom of this post).


Tell us a little about yourself.


Well, I have my "official" Amazon bio: "James Schannep (1984-) is an American novelist and screenwriter with a dozen competition wins and placements. His first screenplay was optioned in 2011 and the Click Your Poison series was launched September, 2012 with the flagship book INFECTED. A United States Air Force Academy (USAFA) graduate with a degree in English, Schannep left the service honorably to write full time. He resides with his wife along California's central coast. James has personally stopped three zombie uprisings without raising national attention."

And my "unofficial" personal website bio/writing manifesto: "Hi. My name’s James and I’m addicted to story. It started innocently enough, just a few movies at friends’ houses, books at school, getting the harder stuff from my older sisters and their boyfriends. Once I was hooked, I couldn’t get enough. I needed more, and in purer form and higher quantities. Soon I was on to whole book series and the seemingly endless RPG titles.

It wasn’t enough to simply watch a movie anymore, I needed to know everything about it: minor characters’ names who weren’t even mentioned in the film, production notes, and trivia. Oh my, the trivia.This is when I started dealing my own stuff. Nothing big, but enough to support my habit and that of my story junky friends.

I shared fan fiction with fellow nerds, I invented boardgames, I added my own voiceover to MST3K, made movies on the family camcorder… I created, and it felt good.Then I had what every veteran writer will identify as the “gateway thought” — not merely away from the innocent-enough world of story, but into parallel universes, into painfully deep philosophic thought, the kind that turns a dreamer into a cynic. I thought, “These stories should be better, I can do better.” I know there are other people out there, like me, addicted to story, who make their living off writing — whole cartels dedicated to story and story production — and soon, they shall know my name."


How did you get into gamebooks?

It started with the Choose Your Own Adventure and Give Yourself Goosebumps series that I read in grade school. To be honest, as a young child, books with thick pages of endless streams of words were rather intimidating. It's a big leap to go from picture books to novels. Gamebooks provides a way to read long passages, but broken up by choices. So I'd say they served as a natural progression from childhood reading into adolescent stories.


What is your favourite gamebooks?

Another confession: After I moved on from those adolescent gamebooks, I didn't look back until I started my own series. Perhaps it's time I check out some other "adult" gamebook authors. Any suggestions?


How did you come up with the idea of Infected?

Originally, I wrote INFECTED as a screenplay back in 2008. Back then it was just a standard genre tale, no bells and whistles. It wasn't until I started the "Click Your Poison" series, that INFECTED rose from the dead to be my first gamebook for adults. Really, zombies are so popular these days, that a gamebook allowing you the opportunity to battle your way through the apocalypse struck me as a natural choice.


Why are gamebooks such a great medium?

First and foremost, because it's *active* reading. You can't skim a gamebook. You can't sit back and "watch" the story unfold. If a gamebook is done right, it should challenge you intellectually and emotionally. And they're a hell of a lot of fun.


What's the most important thing you need to do when writing a gamebook?

Keep some kind of flowchart! INFECTED got too big with too many parallel universes to keep track of in my head. Luckily, I already had a flowchart built up by the time this happened--because without my "road map" I would have been truly lost!


Do you have any upcoming gamebook projects?

I do! I plan on making a whole series of Click Your Poison books, and I'm hard at work on CYP #2 a solve-if-you-can murder mystery. You can keep up with me on twitter or facebook for updates on the book's progress.

https://www.facebook.com/CYPbooks
Okay, for the letter "Z" I bring you "Z is for Zombie" (if that's not a children's book, it should be!). I'd like to share an essay I wrote to answer a question I get a lot. "Why are zombies so popular?"

Tell Me, Why Do We Love Zombies So?

Why are zombies so popular? Well, for many, it’s a call to action. We’re Luke Skywalker, caught in the dregs of daily life, and the zombie apocalypse serves as the storm troopers coming to burn down our uncle’s homestead. Ready or not, time for adventure. Or (in case you’re not as big a Star Wars nerd as I am), let me put it this way: We’re not all the type to go out and join the military or the police force, but we’d like to believe that if danger came knocking on our door, we could rally to that call. The zombie apocalypse is when push comes to shove.
It’s pure escapism. Once the zombie apocalypse happens, all the things that are important to us will fall to the wayside. Unemployment, politics, failed relationships–anything that might have you “down”–all become a moot point when the dead try to eat the living. It’s a second lease on life. You get to start afresh. This is where the true You comes out, the side that’s underestimated by coworkers, family, and friends; the side that, deep down, you know is there. The unlikeliest of heroes can now come out and save the day. Were you a pimple-faced pizza delivery guy back in the day? Well, now you’re a zombie-slaying badass and everyone’s clamoring for your protection. What about the overworked and underpaid nurse stuck on the night shift with little chance of promotion on the horizon? Well, now those skills mean you’re the most valued member of your survival team.
With zombie fiction, we can experience this release all from the safety of our own home. We can escape, if only for a few precious hours. That’s part of why with INFECTED, I made YOU the main character. You get to test that measure of your true self, if only for a bit of fun. Make your choices, then see the outcome.
Are zombies at the height of their popularity? Probably… but they’ll never fully go away, even if interest starts to wane. Like everything else in our world, fads come and go, but zombies are forever.