April A to Z - W is for Walters, David 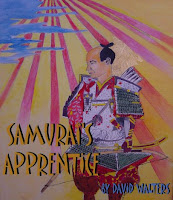 David is an excellent author who has penned many thrilling adventures which you can find here.  He is also a prolific tweeter and you can find his Twitter account here.  recently, David has been working on RPG and gamebook material, including writing for the much loved Way of the Tiger RPG, entering the Windhammer Competition and writing a gamebook for the Adventurer RPG system.

I am David Walters, author of seven novels (including the Samurai’s Apprentice series), and a member of the design team on the forthcoming Way of the Tiger Role-Playing game. I'm based in Edinburgh and work full time in a day job, so keep pretty busy.
My very first experience of gamebooks was with fighting fantasy when I was seven, when I used to borrow them from a ‘mobile library’ van that used to visit my countryside school every other month. Talisman of Death was the first one I read, which is odd considering how I'm now designing a roleplaying game around that setting of Orb.

What am I doing?

I'm in the process of writing my first gamebook which will be out later this year, and it is based on the adventure games guild rules. I'm also involved in a project to write another gamebook with some other writers and artists, but waiting for that to take off.

As mentioned earlier I am a designer on the Way of the Tiger RPG, and as well as writing all the classes and pre-generated characters, I've written two adventures, one which will be available for free with the beta testing pdf, the other bigger one will be in the core rule book. I have also been helping to proof-read a Way of the Tiger gamebook that is due to be re-released in the next month or so. Orb is a great world to spend time in - designed by Mark Smith back in the 1970s - and it is great to shine a torch in new or unexplored areas.
Last year, for the first time, I entered the Windhammer competition, to experiment a little with the format and style of a gamebook. I'm mulling over whether to enter this year or not, based on my other time commitments. I'm waiting for Stuart Lloyd to convince me!
What is the future of gamebooks/roleplaying games?
The development of more advanced computer games largely destroyed the old gamebook industry, and so it is odd that now technology is bringing them back. It seems to me that traditional publishers of novels are looking for ways to exploit new technology to enhance the reading experience and compete with games/films, and for this gamebooks are a good intermediary. The lines are blurring between books and apps, and I see this continuing as technology is fully exploited. We have seen old books be released electronically with new art and features, but can gamebooks evolve into something new, though?
Some of the work done on the forthcoming re-release of the Way of the Tiger gamebooks is blurring these boundaries. You don't see dice rolls or even page numbers, it is all hidden by the technology, so now you are just living the story. Even the old combat choices of kick/punch/throw have been replaced with narrative.
Role playing changed too with technology taking players away from the tabletop and into computer games. However, computer games have never truly replaced the social element to role playing, and I see new ways of publishing and co-ordination arising from technology.
The traditional publishing world is struggling to adapt to the new technologies and ideas coming onto the market, and that leaves gaps for those who can see new ways to create books in new ways, to sit alongside other forms of entertainment. The struggle is no longer to get published, now that self-publishing is prevalent, but rather how to get noticed. Also through time we'll see if it is possible to take a linear novel and make it into something more through technology, without losing its core strengths - I'd love to try it.