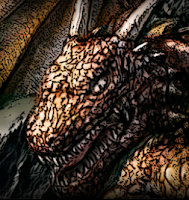 Hello gamebookers!  Today, I give you another Adventurer gift.  One of the aims of Adventurer is to apply it to existing gamebooks.  Today, I present to you the conversion needed for The Warlock of Firetop Mountain.

Most of the work came from making sure that all the luck tests followed Adventurer rules.  I did this by looking at the situation that the character was in and finding the appropriate talent to use instead.  I then had to convert all of the stat changes to something Adventurer appropriate.  I made all the skill changes bonuses or penalties to your Battle Skill in your next combat.  I kept all the stamina changes the same and instead of gaining luck points, the hero gains the ability to re-roll failed rolls which they can use during the adventure (but they can't be used afterwards).

However, I hope you enjoy it and that you've enjoyed the other Adventurer goodies that I've made this month.

The link to the Adventurer rules manuscript is here.

Here is the link to the converter, ladies and gentlemen!

Edit:  At first, I forgot to add what you get when you get the Warlock's treasure, so I have added this to the document.

If you win, you get the following things:

Gems: Roll 4 times on treasure table 3 with a +6 bonus to find out the coins value of all the gems you have found.

Warlock’s spellbook:  Roll 4 times on treasure table 21 to determine 4 spells in the spellbook that you can learn.  You are able to learn them if you succeed at a Mind (Arcane lore) check with a difficulty equal to the difficulty of the spell.