April A to Z B is for blogs part 2 - an interview with Brian T. Ronk

Blogs have gone further than just talk about gamebooks.  Some blogs ARE gamebooks.  Brian T. Ronk's blog, A Hero's Tale includes Vote Your Adventure posts where Brian presents you with a scenario and you, the reader, get a vote in what happens.  It's yet another great approach to interactive fiction which is taking off in other places too (see here and here where there is a new adventure starting). 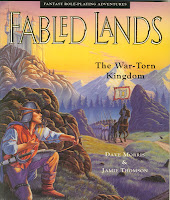 I'm a latecomer to the gamebook scene. I read some of the Choose Your Own Adventure stories when I was a kid. The first real gamebook I came across was the Fabled Lands application that had been created from the series (fans had gotten permission from the creators, not sure if you can get it any more). When the books were re-released a few years ago, I purchased The War-Torn Kingdom to experience the real deal.

I would have to go with Michael J. Ward's Destiny Quest - The Legion of Shadow. A number of Tin Man Games Gamebook Adventure titles come in at a close second, though.


TinManGames Gamebook Adventures are excellent places to start. At the very least, you can get a taste of them through the free version of GA1 - An Assassin in Orlandes or through GA8 - Infinite Universe. Both are free downloads in the Apple AppStore. The Gamebook Adventures games have rules that are easy to understand and compelling stories. Plus, everything you need is contained right there in the app. On the side of price, each one is cheaper than a physical gamebook, and just as fun. 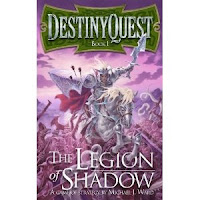 I've got 2 for you. Couldn't resist the first one:
It's a game! It's a book! It's a gamebook!
And a more serious one:
A book where you help shape the outcome of the story through your choices and combat strategy.

I would just call them different. It's fun to influence the story and fight enemies as you go. Interactive fiction like this is the one medium where you can truly tell as many stories as you like. Your choices might change the story quite drastically. The first time you read, you almost defeat the bad guy. The next time, you don't just defeat him, you become the bad guy.
Most gamebooks have a few "right" endings. It's fun to play through a number of times to see how the story unfolds when you pick a different choice.

Where did you come up with your ideas for Hero's Tale?

Years ago, Hero's Tale was actually a game idea similar to Sierra Entertainment's Quest for Glory series. It never went anywhere further than ideas. From it, an idea for a novel emerged, and that is currently one of my main projects.

Then through Twitter, I stumbled upon some Vote Your Adventures and started following and participating. Because of those, I got an itch to give it a try. So I came up with a premise set in the Hero's Tale world, and that is what I am working through with my VYA tale.

I'll confess that I'm still learning. But for me, I need to have a good story to tell. The plot needs to work well by itself, but let to possibilities for gaming. Something where I can create branches to the story. I like when there are different paths to the same end, or some paths to completely different endings. Maybe both. But, I believe if a book doesn't have a good story, it's not going to last.

Other than ideas floating in my head, my main gamebook related project is my VYA right now.

Do you have any other sites besides  http://heros-tale.com/ ?

Not at this time.

I think physical books in general are going to slowly go away. But, I don't think they will disappear completely. The desire for a physical book is too strong. I love having a physical copy myself.
Ebooks will allow gamebooks to grow. There will be things you can do with an ebook that you can't with a physical book. I wouldn't surprise be to see future ebook gamebooks that are similar to Tin Man Games GA titles. Where everything is built in. You won't have to roll dice or keep track of stats. All that will be done for you.

To play Brian's game or to read more about his novel, go to his webiste - http://heros-tale.com/.
Posted by Stuart Lloyd at 11:58 PM