As well as working together to produce an amazing interlinked series of sandbox style gamebooks (the Fabled Lands series) Dave Morris and Jamie Thomson have, between them produced a huge number of high quality gamebooks.  You have to see Dave's and Jamie's bibliographies to believe just how many great gamebooks using different systems and settings that they have produced.  Some well known highlights include Fabled Lands, The Way of the Tiger, Blood Sword and Duelmaster. If you are new to gamebooks and still unsure as to the extent of the impact that Dave and Jamie have had on gamebooks, think about just how many wonderful Discworld novels Terry Pratchett has produced.  They're like that and they're still going. 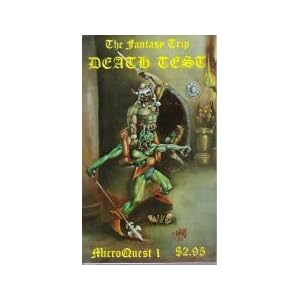 What was the first gamebook you read (that wasn't your own)?
Jamie:  Citadel of Chaos (FF)
Dave: Death Test by Steve Jackson (US)


What is your favourite gamebook?

Jamie:  Fabled Lands 5: The Court of Hidden Faces
Dave: of my own Heart of Ice, by someone else Challenge of the Magi, by Jamie Thomson and Mark Smith

What gamebooks/interactive fiction would you recommend to a newcomer to the genre?
Jamie:  Frankenstein, a new adaption by Dave Morris on the iPhone/iPad

Summarise what a gamebook is to a newcomer in 100 characters or fewer.
Dave: A story in which you get to make choices that significantly affect either the plot or (more rarely) your relationship with and understanding of the characters.
Why are gamebooks great compared to games or books?

Dave: People want a connection with the works they love. That's why fan sites for great TV shows are full of background on the characters and world, not just interviews with actors. In a gamebook, you get to immerse yourself in the story in a way that is much harder to pull off in traditional fiction - though the great works always achieve this. When it comes to writing a gamebook, what's the most important thing that you do?
Jamie:  Flowchart the whole thing.
Dave: Flowcharting is essential. That's like the "screenplay" stage and the actual writing is just the "shooting" in movie terms.
What have you got coming up in terms of your gamebook projects?
Jamie:  More Interactive fiction of the classics like Frankenstein.
Dave: We're also talking to Tin Man Games about doing a series of solo gamebooks based in the Fabled Lands world. We have the FL series coming out on Android and Kindle with a publisher called Spirit Entertainment. And we're going to team up with Inkle, who devised the technology behind Frankenstein, to do some new gamebooks and reissues, starting with Down Among the Dead Men on iOS.


Also, check out Frankenstein their latest release in interactive fiction.