The Lone Wolf community certainly responded well to my request for April a to Z interviews.  Here are some responses from Rustry Radiator from the Project Aon forums.  Have I mentioned that Project Aon has a huge number of free gamebooks from the Lone Wolf world?

What was the first gamebook you read (that wasn't your own)?
The Caves of Time (ChooseYrOwnAdventure)
What is your favourite gamebook?
Appointment with FEAR (FF*17)
What gamebooks/interactive fiction would you recommend to a newcomer to the genre?
The 'Sorcery' series

Summarise what a gamebook is to a newcomer in 100 characters or fewer.
An interactive story split into numbered sections allowing you to make decisions controlling the flow of the narrative.
(is that 100 characters?)

if not...
They are generally told in the 2nd Person perspective (ie YOU turn right, YOU fight the orc). They are often based in a fantasy or sci-fi genre. There is no guarantee the hero will achieve a successful conclusion. 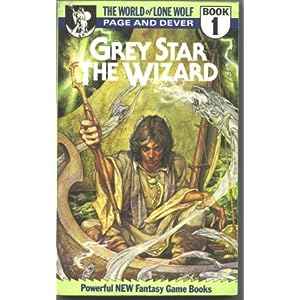 Why are gamebooks great compared to games or books?
Gamebooks are great compared to games or books because you have a sense of freedom & control not present in books & they require little playing space & no other players (usually) making them more intimate & less demanding than many games.
What is your favourite forum/group/online community for gamebooks?
Project Aon is my fave online community for gamebooks.

What has the internet community brought to gamebooks?
Project Aon has revitalised the Lonewolf books & created a richer, shared experience for a previously solitary pursuit.
What’s the best thing that has happened due to being in a forum?
Being able to play all the 'Grey Star' books was a great perk of coming onto this Forum.