Billiam Babble is all over the RPG and gamebook scene.  His Inked Adventures blog showcases his many wonderful products such as dungeon floors, miniatures and mugs.  His Adventures and shopping blog reviews RPGs, gamebooks and a whole host of other goodies.  He has shops on RPGNow and DriveThruRPG and he is a member of several miniatures and RPG forums (I think I met him on this one).

Billiam also collects and sells gamebooks as well as helpfully showing you where to buy them from Amazon so I thought that with such an impressive portfolio and extensive collection (hence the term kleptomaniac hero) how could I not interview him? 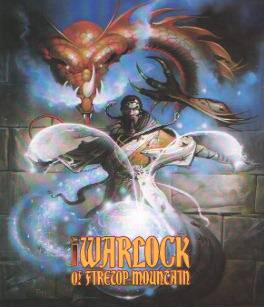 Warlock of Firetop Mountain - the first edition was sent through the Puffin Book Club.  When it arrived I was a little confused and maybe disappointed by what I had been told was a "free combat system".  After settling down to it, I think I was too self-doubting to risk entering any rooms and I think the first memorable battle was actually with the Minotaur in the Maze of Zagor.
What is your favourite gamebook?
Really difficult question to answer.  My nostalgia always drags me back to the first 9 books.  I always enjoyed Forest of Doom because it reminding me of walks in our local woods.  I did "The Walk" in Deathtrap Dungeon many times - a very accessible book.  However, I adore Warlock' - partly for the luscious art work by Russ Nicholson.  Warlock and Deathtrap are both quintessential and archetypal dungeons, but in the end if there was a fire (god, please, no)Warlock trumps Deathrtrap.  Lone Wolf Flight From the Dark would be next...

What gamebooks/interactive fiction would you recommend to a newcomer to the genre?
Depending upon the person, I'd might recommend the first 2 Lone Wolf books (and maybe tell them to use a d10 instead of the random number generator).  If they're a Star Trek fan, I chuck a copy of FF Starship Traveller at them.   If they are a proto-roleplayer or explorer they'd have to try a couple of the Fabled Lands books I reckon.  Monty Python or Merlin fans would be sent to look for GrailQuest books - very silly, self-aware books.   I haven't delved deep enough into Destiny Quest, which is one of the only totally new publications I can think of.  If the person was fond of downloading free and cheaps PDFs from the internet they'd get steered to towards Tunnels & Trolls and the numerous indie solos - but perhaps there's a bit much in the way of game mechanics to throw at a newcomer.  I'd be very reluctant to recommend the Choose Your Own Adventure books (at least the systemless ones), I think lots of the fun comes from the rush of the dice rolling, and hand to hand  victory!  It's no co-incidence that tablet versions of Fighting Fantasy games include animated dice rolls - every aspect is simulated.  Oh, god, Sorcery! is pretty awesome as well, but a bit of a slog for a newcomer, I guess.

Summarise what a gamebook is to a newcomer in 100 characters or fewer (so I can tweet it with a link)
"An immersive computer game without electricity."
"A paper portal."
"Adventure narrative for control freaks."
Why are gamebooks great compared to games or books?
Portability.  You can play a gamebook on the days that you've decided to hate your friends. ;)  Controlling my destiny is really important, normal books are like being trapped inside someone else's head.  Gamebooks are better than normal books because English Teachers usually don't understand them.  Look I have issues, okay?
Where could you go to get a gamebook to complete your collection?
Normally I'd visit Billiam Babble's Bb's Vintage Game Books Direct http://bit.ly/BBgamebooks - on his Adventures & Shopping site, but since I am Billiam, I'd probably be searching Ebay, Amazon and posting queries on Unofficial Fighting Fantasy forum.  Trying to complete a collection using Ebay can feel like a duel to the death!  I think of charity shops as a lucky dip, but it almost impossible to seek out specific titles in charity shops.  Gamebooks from charity shops usually smell really interesting...

What would collectors of gamebooks want to think about?
As a collector myself I often ask whether or not the adventure text is more important than the actual condition of the book.  If you've never played a specific title and that's more important to you than smooth spines and unmarked Adventure Sheets, then you have very little to lose, you can buy old copies or brand new reprints with ugly new art.  Compared to paperback novels, even the most well loved gamebook can end up looking like something libraries would pulp, so it doesn't pay to be too fussy and the definition of "VCG" or "mint" is often relative to the seller's own collection of battered greats.  A surprising number of auctions are pinned on the fact that different older editions have a variety of covers, people hunt for matching covers.  Always check on Ebay and Amazon that the picture displayed is of the actual book and if not ask the seller what the differences are.  Look at the books you already own and get to understand the printing information inside-title page.  Never trust an ISBN!    A newer edition doesn't always mean better print quality - in reproductions of books from 70s and 80s the detail of the line art can suffer with blurring and high contrast.
What have you got coming up in terms of your projects?
Lot's of little back-burners. I'm often drawn back to designing floor plans for my Inked Adventures brand for use with fantasy miniatures in tabletop role-playing.  I love drawing -all of my plans have a hand drawn element - most are works of nostalgia, harking back to an age before computerised textures.  I'm often doing small projects for commission, and the Inked Adventures modular floor plans get put back in favour of more immediate cash or praise.  http://inkedadventures.com/
On the subject of gamebooks, I fantasise about creating or co-creating a gamebook where every room or location is illustrated with a top-down view or mini-map, perhaps on every other page.
Do you have any other sites besides your blogs?
My different sites can be reached through my about.mepage.  http://about.me/billiambabble
You sometimes find me messing about of Deviant Art and Facebook when I'm not bothering folk on forums.

What do you think the future of gamebooks is?
I'm surprised that the future hasn't already happened.  I really thought that with the rise of e-readers and tablets we'd be seeing a lot more interactive fiction, with or without the game mechanics of animated dice-rollers.  The selections I've seen available for the Kindle and iBooks have been pretty poor, when you think of the vast back catalogue many publishers and independent authors must have.  We now have a generation of children and teenagers who think nothing of hyperlinks.  They know that media doesn't have to be linear - in fact a few seconds will pass and clicking on something else is essential!   I think that publishers underestimate that the written word is still appreciated by gamer teens, and that somehow the concepts of interactivity have to be graphics or gesture based.  Gamebooks were an intense fad in the 80's, it's that concept which may be working against any sort of major comeback in digital form.  Even back then there was a lot of snobbery amongst fantasy role-players, somehow gamebooks forintroductory purposes.  I remember the editor of some solo- spy book titles I wrote for Funfax telling me that D&D and fantasy games were dead and pretty much best avoided.  Of course that was before Harry Potter ... The gamebook definitely has a future in it's current form.  They are deceptive in the way that in paper or electronic form there seem very "passive" when compared to modern computer games, but that's the point - gamebooks can actually be compared to computer games, unlike normal books which are somehow championed as the morally and educationally superior choice to other popular mediums.  Gamebooks are almost medium in their own right.  And yes, they would be competing with other forms of entertainment, perhaps even with the time people are willing to give to their distractions.  However, this might be one of those moments in history when gamebooks make more sense to the customer than at any of time.  We like pushing buttons on our e-reader gadgets - why not make the button pushing a death-defying choice?  In terms of the printed book we're already seeing a rise in the use of print-on-demand printers and downloadable texts.  This is really good news for the future of any niche interest book market.  Hard to predict, the future is, but I definitely believe that the opportunities for gamebook authors and publishers are there, so perhaps we're about to be treated to a resurgence of interactive narratives - and amongst those they might be a fair few gamebook adventures.

If you want to know more about Will or buy some of his excellent products, you can look at his blogs at http://inkedadventures.com/   and http://adventuresandshopping.blogspot.com/.

You can buy Billiam's second hand gamebooks from here - as a customer I cannot recommend him too highly for his wonderful service. 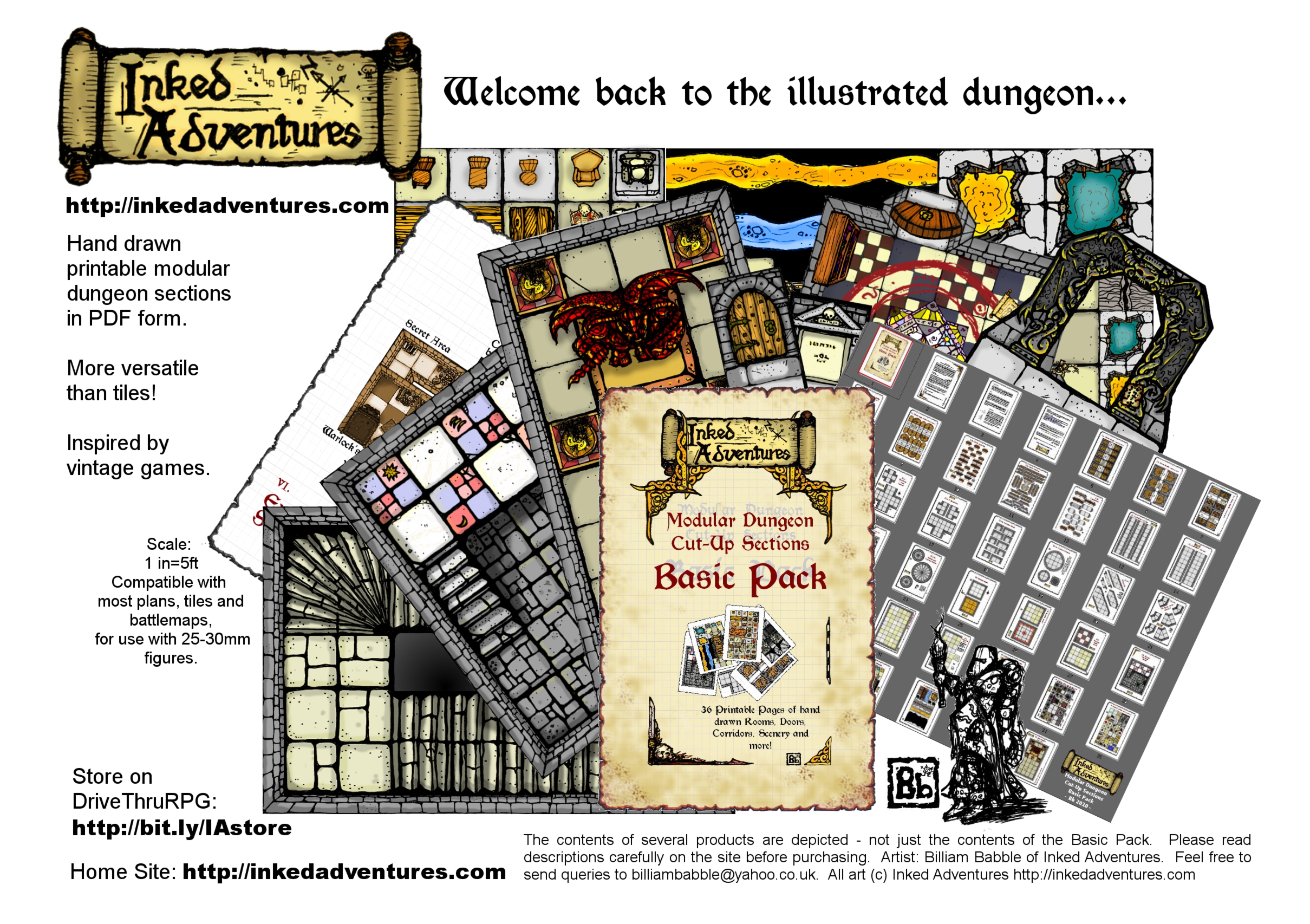