April A to Z - W is also for Wright, Andrew

Andrew Wright has been a huge contributor to the world of gamebooks on the internet for as long as the internet has been around (and before that, he was probably planning lots gamebook related stuff to put on the internet as soon as it was to be invented).  There is nothing he hasn't done.  He has written many many gamebooks.  He has won competitions for his gamebooks.  He has produced a gamebook for the iPhone.  He has and is the leading expert of Titan's bestiary and he is also a lynchpin in many gamebook groups and forums (going by the name Greyarea13).  He is also a regular contributor and Out of the Pit editor for Fighting Fantazine.  I could go on but I'll be here all day.  For more information, you can read his entry on his Titannica page  (yes - Fighting Fantasy has a wiki, don't you know) or have a look at his gamebooks.org page.

I am also feel very privileged that Andy also joined my little venture in reviewing gamebooks on the Lone Tiger blog and also answer some questions for me.  Myself and the world of gamebooks is forever in his debt.

Choose Your Own Adventure #5 "The Mystery of Chimney Rock" by Edward Packard. I bought it at a second-hand book stall at a fete in Hong Kong as a kid, and I was spooked by the horror and disturbed by the gonzo possibilities of the various different endings.
What is your favourite gamebook?

Heart of Ice by Dave Morris is just awesome and I blogged about it extensively at the start of my blog's existence. Rounding out the top 5 would be Creature of Havoc by Steve Jackson, The War-Torn Kingdom by Dave Morris and Jamie Thomson, Deathtrap Dungeon by Ian Livingstone, and The Demon's Claw by Dave Morris.
What gamebooks/interactive fiction would you recommend to a newcomer to the genre?

My daughter had a lot of fun with the Fabled Lands iOS app, so I'd recommend that for tablet fans (though I fear it is no longer available). Tin Man Games' Gamebook Adventures are likewise awesome, and if you enjoy a good dungeon crawl, try my own Catacombs of the Undercity (blatant plug!). Bookwise, I'd recommend something simple like the reissued Deathtrap Dungeon or Warlock of Firetop Mountain.

A book you play!
Why are gamebooks great compared to games or books?

Books: Because you get to decide what you want to do, instead of some whining, self-absorbed character you cannot identify with.
Games: Gamebooks are the perfect solo immersive experience if you can't get a bunch of friends around to cause dice-rolling mayhem.
Where did you come up with your ideas for gamebook stories?
I talked a lot about this in part 1 of my ongoing Adventure Game series of articles in Fighting Fantazine (part 1 is in issue 4). Bascially, the ideas could happen anywhere, and I always keep a notebook and pencil handy to write them down. They usually start by me thinking: "I wonder what would happen if Gonchongs invaded the real world?" or some other frivolous nonsense, and flow on from there.

I look at other systems and see what I like and could borrow and rename and adjust and tinker with! I do it to my own gamesystem rules too, which is why the rules for the 2011 Windhammer Prize winner 'The Sea of Madness' are essentially a re-skinned version of an earlier Windhammer Prize entry called RAMPAGE!
When it comes to writing a gamebook, what's the most important thing that you do?

Three things actually. 1) Flow chart it all out perfectly. 2) Assign all paragraph numbers to events on the flowchart. 3) Write paragraphs entries relentlessly, ticking them off as I go.
What have you got coming up in terms of your gamebook/competition projects?

Currently I'm working on a bunch of things when not being waylaid or plain kidnapped by real life. I'm trying to finish an Advanced Fighting Fantasy role-playing scenario for Fighting Fantazine that is equal parts Moby Dick and Inside the Monster by Lucian of Samothrace. I'm also half-way through a sequel to Out of the Pit, again for the new version of Advanced Fighting Fantasy by Graham Bottley at Arion Games. Who knew 250+ monsters would take so long to write about! No wonder Marc Gascoigne never wrote another Out of the Pit! I'm also starting a 200 paragraph mini-adventure for an upcoming issue of Fighting Fantazine. It's called Barbarian Warlord! and it's essentially a reboot of Armies of Death, where your hero has completed Deathrap Dungeon and raised an army to conquer the lands east of Allansia. Instead of some poxy, poorly-developed Shadow Demon however, your enemy is a mighty and devious Barbarian warlord who has united the tribes of the wastelands and is intent on conquering Allansia himself.

I'm also thinking heavily about what to do for the Windhammer Prize this year. I got some excellent feedback last year on Sea of Madness, which has inspired a few ideas on things to do differently next time. Finally, I did a loose plot for a sequel to Catacombs of the Undercity for Tin Man Games. It's called Lord of the Undercity, and in it you play a journeyman thief trying to rebuild the Red Hand Guild of thieves after they were destroyed by the adventurer in the first adventure. There was going to be lots of intrigue, infiltrations, assassinations, and grey wars between the different criminal organisations that battle for control of the Undercity beneath Orlandes - dungeon politics basically! It's on the back burner at the moment as there's too much on my plate already, but it's something to focus on for the future. 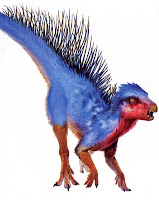 Why did you start a blog?

I'm not really sure. Mainly to explore aspects of not just gamebooks but a whole host of other stuff I'm interested in, but it's just so hard to find the time!
What has happened because of your blog?

I've got to talk to many interesting people, including yourself and authors like Dave Morris, whose work I greatly admire and who is definitely a big influence on my own work. Interviewing Michael Ward about Destiny Quest was fun too, as was reviewing the Fabled Lands RPG!
Has anything surprising happened because of your blog?

For some reason my post on feathered dinosaurs is insanely popular, and also my first post on Catacombs of the Undercity. Can't work out where the hits are coming from!
What is the most important thing when writing a blog?

To regularly update it!!!! (*slinks away in shame*)
Do you have any other sites besides your blog?

I moderate the Titan_Rebuilding and Fabled Lands groups on Yahoo, although they're both a bit quiet now too. I'm currently negotiating a move from Thailand to Saudi Arabia, and if that happens I can see I may have a bit more time on my hands to get busier on the blog and website front. In Bangkok I regularly spend two to three hours stuck in hellish traffic, and that's time wasted that could be better spent gamebooking!
What do you think the future of gamebooks is?

Digital. More web-based browser stuff and more tablet titles. Also, more POD and more PDFs. It's perhaps symptomatic of society of a whole, but time spent with a good book is becoming rarer and rarer as people find themselves spending more and more time interacting with a digital screen of some form or another. Sad but true, although perhaps there's a gamebook idea in that!

Right - so there we go.  Andrew's blog is here so you can enjoy all of his posts .  It was a mention from his blog that kept me blogging so I've a lot to thank him for.  Another good place to start is his Titannica page which links to some other stuff he's done.  However, the sites that Andrew has contributed to are just too numerous to list here.  Google Greyarea13 to find all of his internet sites.